There are a few Shanty 2 Chic farmhouse table designs out there. They’re fantastic. I’m going to start building them as often as I can and maybe sell a few. But in the meantime, I’ll showcase my work here on this post. 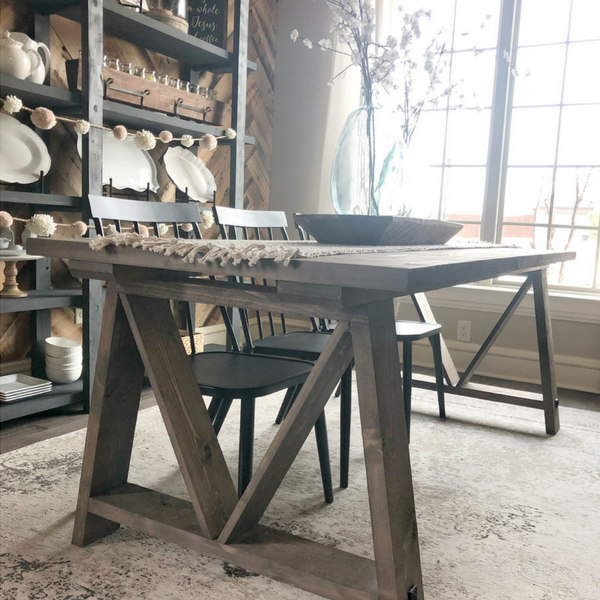 I’m going to start off with the Fancy V Dining Table which they just recently featured earlier this month (September 2018). They describe it as a more modern take on a farmhouse table, which may be a little contradictory. But whatever…it looks cool. Click here to see their free plans for this table.

I just recently finished the first phase of our Master Closet Makeover. I’ll resume that project later this year. In the meantime, I’ll be working on this Fancy V table. We currently don’t have any tables in our new house. And we’re planning to host our families during Thanksgiving, which is just around the corner. So I need to work fast.

The Shanty girls highlight the V formation of the table on their project, but there’s also clearly an “M” in the design. For this reason, I’ve decided to name my version of the table “Mollie Vaughn.” I don’t know anyone by that name, but I just think it’s a cool name. And I think it’s important to give your pieces a unique name in their titles rather than just a simple description like “Rustic Farm Table.” That’s boring.

Sometimes you see something you like and say “I wanna build that.” But then once you start making it, you realize there are certain details you’re not ok with. As for this Fancy V table, the way the Shanty girls have made it, the leg structure is only 6 inches from the end of the table on both sides. This means that it won’t be easy or comfortable for someone to sit at the end of this table.

Of course, that also means there’s more space for people to sit on the sides of the table because there’s lots of space between the leg structures. Three people can sit on each side instead of just two. Nonetheless, I’m still not sure I want to follow the exact specs in this regard. I think it would be a little strange to have a group of people at a table with no one at the table’s ends.

I was pleasantly surprised with how the boards of the tabletop came together. The Shantys used seven 2x6x8 boards to compose the top. I instead used four 2x10x8 boards. And then I used 2×6 pieces to make the breadboard pieces at the ends, just like they did.

I ripped all of these pieces so that each abutting board connects seamlessly with the other boards. I don’t want any “crumb catching” space between those boards. I’m planning to polyurethane this top as one piece, so it’s gotta be seamless.

I bought a fancy DeWalt planer just last week. I really should’ve used it to make these boards the same thickness. Not sure why I didn’t…it would’ve made things easier. It’s very tricky to make the boards even on the top side of the tabletop…especially when the top is facing downward when you’re connecting the boards. I had to remember and utilize some old woodworking tricks I used to know.

The Shanty girls used a Varathane stain called Briarsmoke on their table. I could’ve bought and used that stain…and it would’ve been easy to apply it. But instead, Aniela and I decided to go with an Varathane’s Antique White stain because I already had a quart of it. And we were simply curious to see how it would look on a table.

It was tricky. After applying 3 coats of stain to the tabletop, I ended up sanding the whole thing down to the bare wood again. It just didn’t look right. It was blotchy, which took attention away from the beautiful wood grain. I might’ve accepted the blotchy stain and moved on to the polyurethane stage, but there were also a few gashes on the tabletop that I wanted to deal with. So it just made sense to sand it all down and start over, which is what I did.

The second time around, I realized that it’s much better to apply a thin amount of the stain rather than slathering it on. And it’s also important to let each coat dry before applying the stain again. Same thing with the polyurethane. I put on 3 coats of Varathane’s fast-drying polyurethane.

I put screws up through the runners and into the bottom of the tabletop, and voila! It’s done. We plan to use this table throughout the holidays and then sell it. This table is only 6 feet long and we now realize it’d be better to have an 8-foot table in that space. So that’s what I’ll be building next. I won’t make another one of these Fancy V tables unless someone commissions me to make one. You can leave comments and questions in the form below.