Google Shopping Ads on Etsy Aren’t Worth It

If you make, market and sell your own products, you’re probably already on Etsy. And if you’re on Etsy, you’ve probably noticed the Google Shopping Ads feature. Is Etsy Google Shopping worth it? After trying it out for a few weeks, I’d have to say no…it’s not worth it.

Of course, it’ll definitely give you lots of impressions and clicks and maybe a few orders. But in my experience so far, the costs clearly outweigh the revenue. I’ve had the thing turned on for a few weeks with a budget of $10 per day. Sure enough, when I google the keywords or the title of my Etsy products, they prominently appear in the Google Shopping results. Here I am in the very first spot for “red entryway organizer with hooks.” 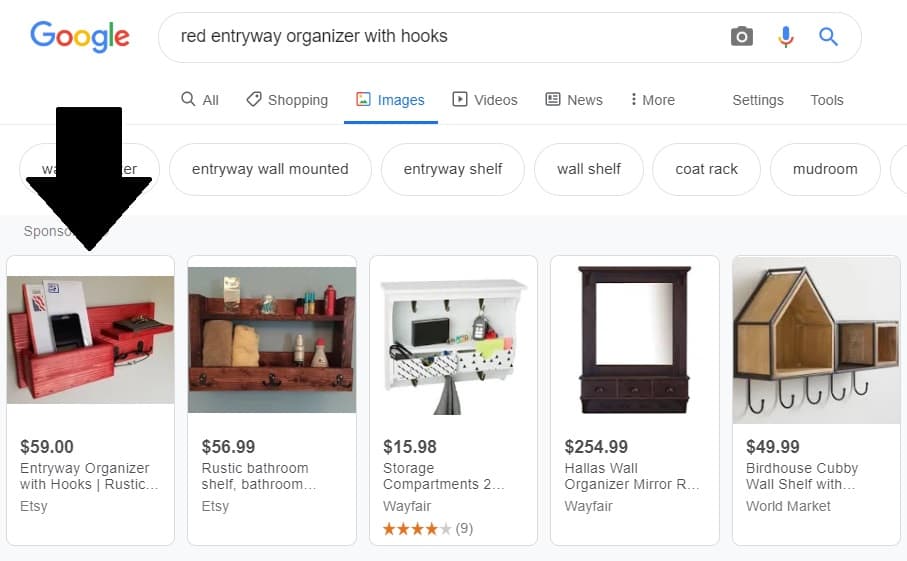 To be perfectly honest, I turned on this feature a few weeks ago and forgot about it. Not immediately. For the next several days, I looked at it often to see if I’d gotten any impressions or clicks. The last time I checked it, all I saw was a bunch of zeros.

But then the ads apparently kicked in and I started getting thousands of impressions and dozens of clicks.

Is Etsy Google Shopping Worth It?

Of course, all of these clicks were costing me money and I was totally unaware of it. They were quietly charging me $20 here and $20 there. Over the span of the last week, they charged me a total of about $100 for these Google Shopping ads. And these charges would’ve continued indefinitely were it not for the fact that someone finally bought one of my products for $79. The item was a wall organizer with hooks and a basket which I’d built a few weeks ago. Do you want one? Click here to read all about it and purchase one 🙂 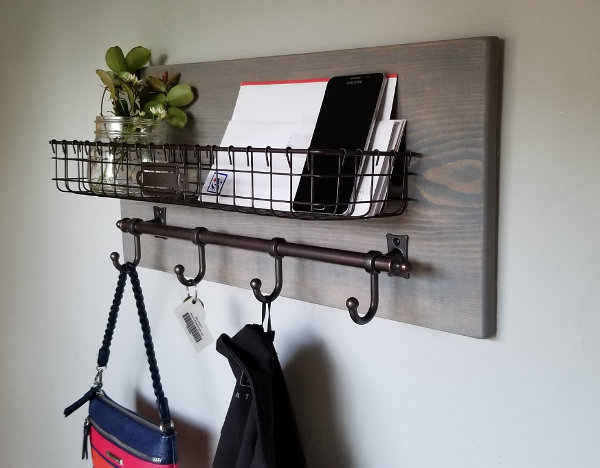 That same day, I got an email from Etsy which informed me they’d charged my bank account $29.11. For a while there, I was under the impression that Etsy had taken a $29.11 cut from the $79 sale I’d just made. Outrageous! But that turned out not to be true. Etsy got only $3.95 from this sale, which is 5% of the selling price. A very reasonable transaction charge, in my opinion.

“Ok then why did they take $29.11 from my bank account,” I wondered to myself. Keep in mind that I’m a busy guy with a family, a full time job and two side businesses. So I wasn’t immediately able to look under the hood and figure out what’s going on.

Now, I’m not going to be so arrogant as to claim that all these impressions and clicks should’ve resulted in more sales. A lot of people took a look at my products and simply decided not to buy them. That’s reality and that’s the market.

I stand by the woodworking products I make. I’ve built them, described them and presented them as well as I can. I still believe there are lots of people out there who would desire and buy my products. And I believe my asking prices are reasonable.

The eternal marketing question, however, is how I can connect with those people. How can I make them aware of my products? Needless to say, I could go heavy on the advertising on Google and elsewhere…and that would certainly get the ball rolling. Sales would roll in. I’d have to box up my products and ship them off to expecting customers. And then I could accurately claim that I’ve generated revenue.

Ahh but revenue isn’t exactly the thing we’re after, is it? Alas, it is not. You and I are seeking the dreaded p-word. I’ll type it softly so the anti-capitalists won’t hear it: were trying to make a profit.

Although I’d certainly generate some revenue by heavily spending on ads, that spending would wipe out whatever little profit I stood to make. And if you factor in every other expense that’s required to put the product in the customer’s hands, I’d basically be working for free.

Now let me just say…I love working with wood so much that I probably would do it for free. The satisfaction I get from people appreciating my work and bringing it into their homes…that alone would be worth it to me.

Unfortunately, satisfaction and pride don’t pay the bills. I simply must get a monetary return from all the time and energy I expend alone in the garage…away from my family and my other responsibilities. Not to mention the fact that I spend lots of money on tools and materials. 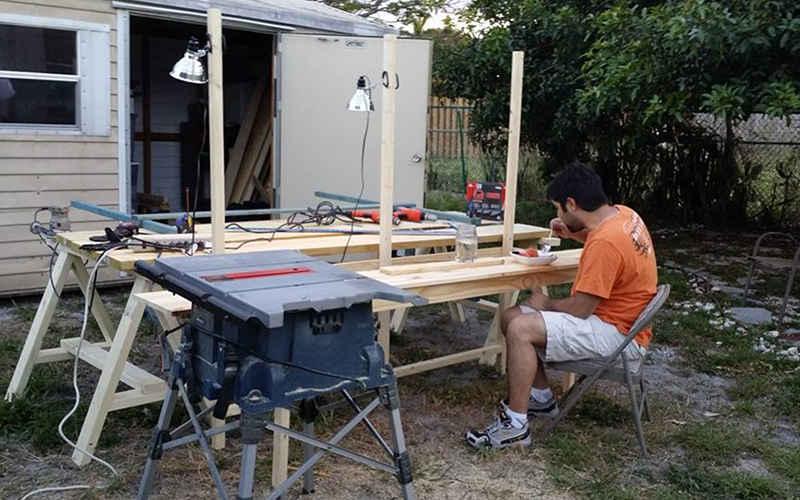 This is me a few years ago…eating dinner on a desk I was building that day…the same desk on which I’m writing this post that you’re reading.

I remember in 2002 I worked at a manufacturing company that was owned by a smart businessman. I’d bring him large quote requests from our customers. He would browse the items and numbers on the paper and then check the current price of steal. And of course, he also had a good idea where the price of steal was headed.

My former boss would then write a multiplier number on the quote which would dictate the pricing I quoted to the customer. The resulting prices always seemed unreasonably high to me. Nonetheless, my boss would never deviate from the multiplier he wrote on the orders.

“Considering the large size of this order, are you sure we can’t go with (lower multiplier) in this case,” I would ask him.

Seeing my disappointment, he would add;

“I would’ve accepted (lower multiplier) for that order six weeks ago. But the price of steal has crept up since then…and he (our customer) knows it. That’s why he’s trying to sneak in this large order right now…hoping we’re unaware of what’s happening in the market. Go ahead and give him (high multiplier) pricing. If he fusses at all, give him (our competitor’s) phone number and we’ll see if those dummies are willing to spin their wheels and work for no profit.”

As you can imagine, I learned a lot from that man.

The hardware and materials to make the organizer cost me about $30. It’s going to cost me another $30 to package and ship it. As I’m sure you’re able to reckon, I’m already down to a profit of $19. Granted, it only takes me an hour or so to make one of these things. But if I factor in all the other time it takes to pack and ship it, I’m making less than minimum wage to provide this product.

Of course it goes without saying that if I spend anything on advertising to sell this organizer, even my piddly $19 profit is gone. And if it takes a whole $100 worth of ads to sell one, then I’m operating at a big loss and wasting my time. I’d be better off selling watermelons on the side of the road.

If my $100 of Google Shopping ads had resulted in 5 to 10 sales, that would be another story and I’d have to continue determining whether or not it’s worth it. But after spending $100 to sell just one, I don’t plan to spend another dime on Google Shopping ads through Etsy.

Eventually, I’m sure one or two Etsy experts will come along and point out everything I’m doing wrong. They might say that my costs are too high. Or they might say I should charge more. Or maybe my setup, titles and descriptions aren’t what they should be. I would certainly appreciate and implement any constructive feedback you have to offer.

And I’m sure there’s a lot of people who’d say this just isn’t worth my time. Problem is…this is what I love to do. And when I say I love it, I’m not just talking about the part where I get to build stuff. I’m referring to all of it…taking pictures of it, writing about it, making product pages for it, listing it and even packing it up…all of it.

So as you can see, I simply can’t abandon the endeavor. Or quite simply, I just know I won’t. I want to get better at it and figure it all out. And please forgive my audacity, but I still dream of being successful at this. Not successful enough to buy a yacht. I’m not unrealistic. But just successful enough so that my time in the garage is clearly worth it…because that’s where I want to be.