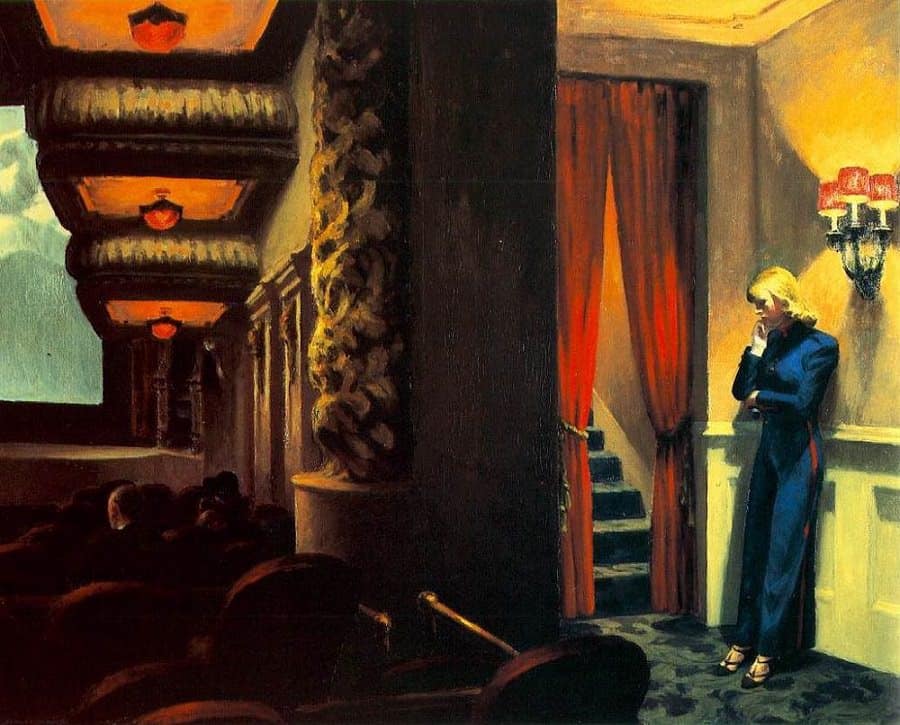 As an adult, I’ve had a lot of uncertainty about what I should do with my career. But as a teenager, I had no doubt how I wanted my career to start. Before, during and after college, I worked at movie theaters. Adding all my theater employment together, it comes to about 13 years. During those years, I did it all. I served drinks and popcorn at the concession stand, swept up popcorn and picked up trash in the auditoriums. I sold tickets in the box office and also tore the tickets at the usher stand. Up in the projection booth, I spliced films together, threaded the projectors and kept them clean and running properly. I can’t think of a more rewarding way I could’ve begun my working years.

And as you can imagine, I also saw a lot of movies…many more than I should’ve seen. In addition to those I actually sat down to watch, I took in a good portion of the movies by simply being up there in the projection booth, making sure the sound and the picture were optimal. As an usher, I stood in the back, waiting for the shows to end so I could clean up. I politely nodded to customers who filed out of the auditorium with the exact emotions the filmmakers wanted them to have after watching their movie. 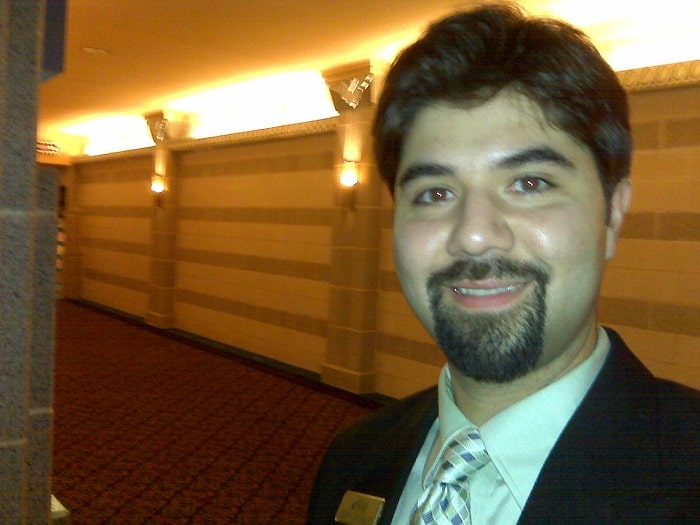 At the Metropolitan Theater in Austin, Texas in 2009

But if you had already seen that movie a dozen or more times, the intended effects of the movie had mostly worn off by then. So in many cases, I just stood there and did my job. I smiled when I had to. In the isolation of the projection booth, I didn’t even have to smile. I had a hundred other thoughts on my mind, mostly about me and my life rather than the characters on the screen. The grandeur of those elaborate productions couldn’t compete with the drama of my own life…at least not in my mind.

So when I recently came across New York Movie, a 1939 painting by Edward Hopper, I immediately connected with the disinterested usherette it portrays. It’s clearly not the first time she’s stood there and allowed herself to get lost in her own thoughts while patrons around the corner get lost in the movie. Perhaps she also enjoyed that movie when she saw it for the first time several weeks ago. But that was many screenings ago. Now it’s just like a monotonous song she’s heard a hundred times. And she simply has other things on her mind.

Hopper painted New York Movie towards the end of The Great Depression. The local movie house was a cheap way of escaping the harsh realities of the world in those days. For a couple of hours, moviegoers could forget about everything that was wrong. In the movies, they could get lost in fantasies in which everything was right. They got to see places their own eyes would never see. They experienced adventures they only could’ve dreamed of. And most important of all, they simply got a break from the routine; vivid colors instead of dull darkness, warm beaches rather than cold cities and actual excitement instead of the drudgery of an average day.

Most movie theaters of this era had only one screen.  Therefore, if you had already watched the movie that was showing on that screen, you either watched it again, went to another theater or found another way to spend your time. Multiplexes were still decades away. I worked at theaters that had as many as 24 screens. So we had an average of 4 new movies to watch every week. And even if we had already seen everything we wanted to see, there were several other fun things to do at our theater. Not the least of which was socializing with all the customers who were there to have a good time.

It’s easy to remember all those fun times. Lost in all those memories, however, were quite a few dull moments. The thing is…I was there at the theater when you were there with thousands of other customers. But I was also there when hardly anyone was there. Those were usually weeknights and weekend mornings. Sometimes I’d leave the theater around 2am and come right back a few hours later for the morning shift.

Regardless of how many people were there, I still had to go through the motions of the job. How many times did I start a projector and show a movie to an empty auditorium? How many times did I walk around and perform the mundane tasks on a checklist? During really slow times, the manager had us cleaning seats or doing some other mind-numbing activity. (post continues below)

Review: There Will Be Blood

I mention all this to say that I know a thing or two about standing around at a movie theater. Anyway, enough about me. The attention of New York Movie is evenly divided between the young female usher and the right side of an auditorium where a movie is playing. Many seats are in view, but only two lonely souls are sitting in them…and they’re not together. Perhaps this is one of those slow weekday matinees.

It’s not clear what’s showing on the screen but it doesn’t matter. Showing us more of the movie would only take our attention away from the usher. From what we can see of the auditorium, this appears to be an elegant place; sculpted columns, ornate fixtures, heavy drapes, brass railings and patterned carpet. Hopper paid extra attention to these details. What we see in this painting is a collection of features from Hopper’s favorite theaters which included the Palace and the Globe. He repeatedly went to these theaters to sketch every detail.

Even the sharp uniform of the usher indicates that this was a fancy place to watch a movie. Also, did you happen to notice her high heels? Imagine how it felt to take those off after a long shift on your feet.

You don’t see very much of this elegance at theaters anymore. Theaters used to be classy. And the characters in the movies were also classy. Nowadays, theaters are just another public place where people wear shorts and flip-flops. Reminds me of the fact that people used to wear suits and dresses during air travel. What a different era that was. But I digress.

Hopper’s wife Josephine posed under a lamp at their apartment to assist him with this painting. She did this for many of his paintings which feature females. “Jo” was highly supportive of her husband’s work. She encouraged him to experiment beyond the materials and techniques he already knew. She also played a large role in his business affairs by cataloging his work, exhibitions and sales.

In 1939, seeing this distracted young woman in a movie theater might have seemed strange. “How could anyone be bored or checked out at a movie theater?” “Why isn’t she watching the movie?” But this was precisely Hopper’s point…the extravagance and the larger-than-life experiences of the movies are not real. Lots of people were escaping real life by getting lost in the amusements of the modern world. And though there certainly was some value in those diversions, they didn’t actually contribute much to anyone’s quality of life. In fact, they made the echo of a person’s emptiness even louder.

80 years later, this observation about the shallowness of entertainment is plainly obvious. Our culture is steeped in entertainment. Two decades into the 21st century, an American can insulate himself with media to the point where he never has to face real life. How many millions of Americans would never dare to unplug their devices for fear of the resulting silence? If they turn off all the shows and the sports and the social media, then they would suddenly be left alone with the issues they don’t want to deal with.

Capturing the Character of Americans 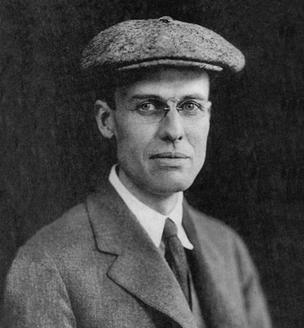 New York Movie is consistent with much of Hopper’s work. He often presented one or two characters in a public setting like a gas station, a restaurant, a motel or some other urban structure. His characters exhibited loneliness, boredom, disinterest and resignation. His most famous painting, Nighthawks, shows four characters in a brightly lit café on a street corner. Even the man and woman who are sitting together don’t appear to be engaged in conversation. 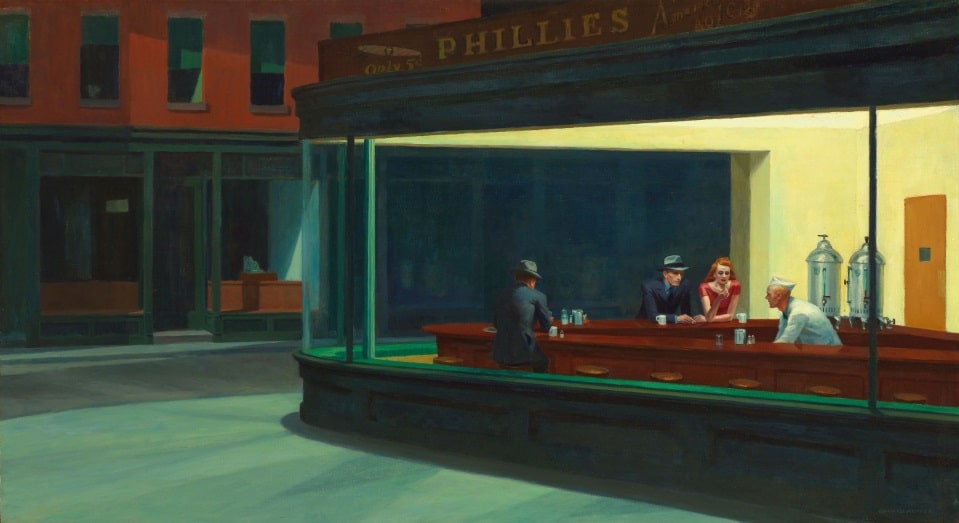 Several of Hopper’s subjects feature a distant stare. Most of them are women. Though physically present in one place, their thoughts are somewhere else. Despi 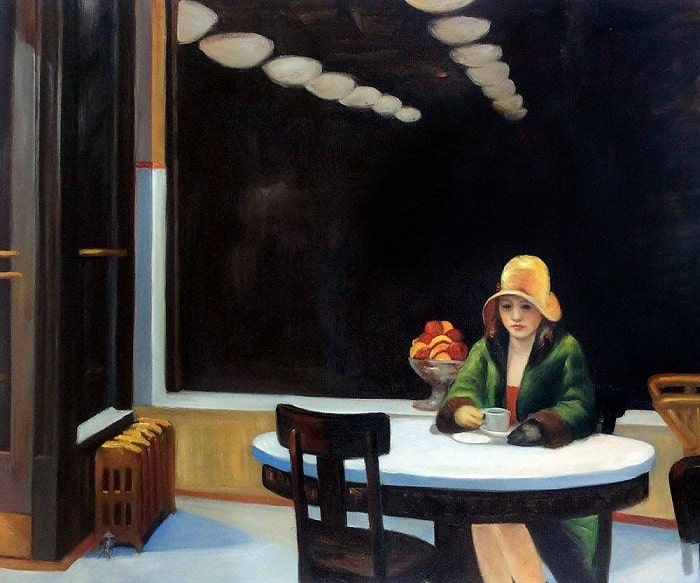 “Great art is the outward expression of an inner life in the artist, and this inner life will result in his personal vision of the world.”

“In general it can be said that a nation’s art is greatest when it most reflects the character of its people.”

New York Movie is on display at the Museum of Modern Art in New York City. 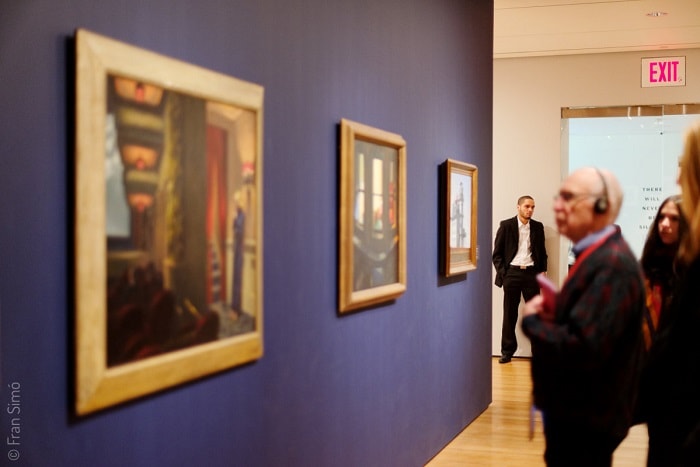